The Trust in Play Solstice’s Play party - Analysis and consideration

The premises were all wrong…

But we decided that we could organize the longest zoom ever anyway: The Solstice’s Games Party was on. 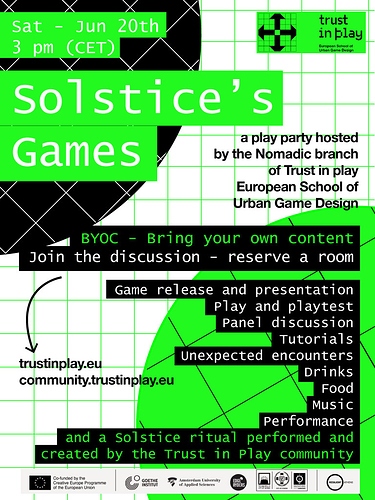 The idea: to stay together 10 hours (a marathon) share the result of the last six months of work and resilience by the Nomadic Trainees, open up room for experiments by participants, create rituals together, and have fun!

We started jamming ideas together with Natalia (@Nskocz) and a program was sketched, the first good discovery was that we were able to adapt in case we had a lot of participant and sessions: you can always create a new virtual space!

We spread the word out, with a post on the platform, a message in the TiP Whatsapp group and personal emails, plus (thanks @MariaS and @Matoula_Koutsari ) also trougth the official Tip channels and Goethe Institut channels. 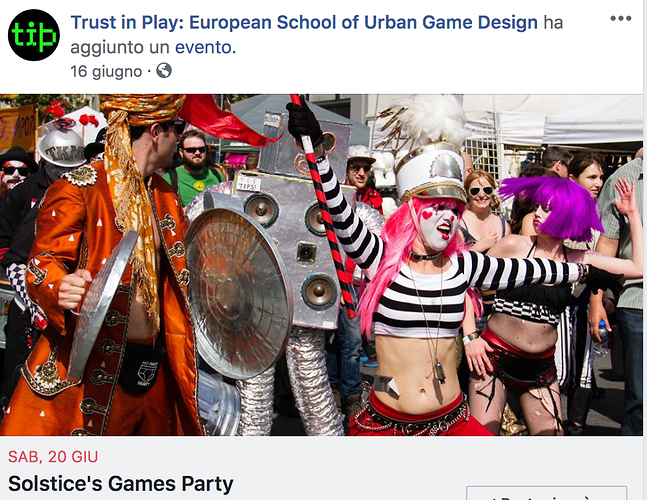 The night before the event I got two sparks in my brain.

The first is that this kind of events have to be cinematographic in a way, we are in fact in front of a screen so we unconsciously expect something movie-like to happens, and we are usually (uncounscouscly) disappointed by that, and a zoom call it becomes immediately a zoom call.

I’m lucky that I edited and created tons of video in the past so I put together this introductory video…so much fun! 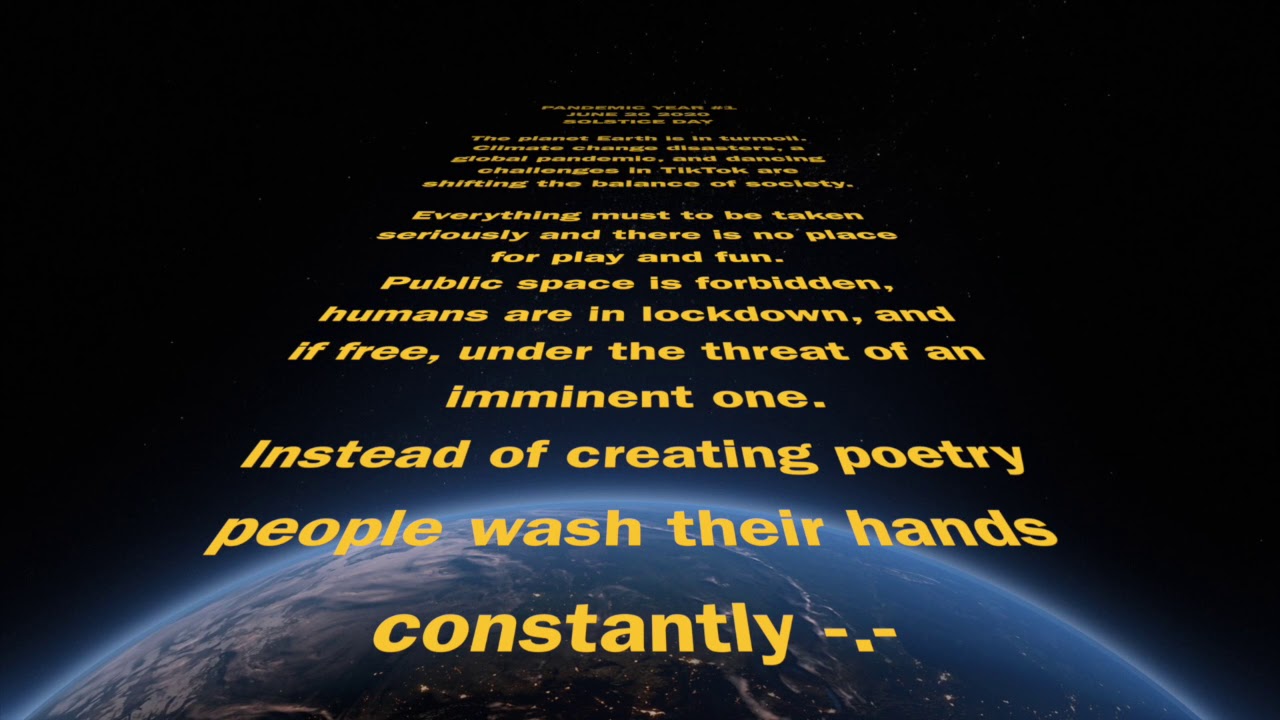 The second is that when I was naming the different rooms for the events I had the feeling that a name was not enough, after researching online I found this article, that describes an entire online party happening on a google Spreadsheet and I said to my self…“found it!”

So 5 minutes later I decided to rent an island.

And start creating it on a google spreadsheet, that would become the most important link ever.

The process made me think a lot of the concept of Uncanny valley, that was used for the first time to describe the robot evolution in the 70ies.

The concept is this, when you are developing something that is resemblant to the reality you have to options: 1 you’re able to recreate this reality (usually a lot of budget is required in order to do that), 2 you stay away from the realism and you focus on the thing that make the reality you want to create likable.

For example, why people like more R2D2 then C3PO? R2D2 has just the right amount of human characteristics without trying to replicate the realism of a human creature.

And when you approach it you appreciate the human like features instead of judging the realism of it.

You can end up in the uncanny valley, a place where human will have repulsion for the robot, because they will recognize that is not human enough, so it will look like a corpse or something dangerous.

After some experiment in the past that ended up in the Uncanny valley I’m really aware of it and I try to stay away as much as possible…so if you want to recreate a space in an online environment how do you do it?

What is the coolest thing of a real space?

For me exploration, the fact that you can move between space and every turn is a surprise.

So I’ve applied that to a google spreadsheet, filling it with random pictures, colored squares and etc…

Also, since it was clearly not an island it opened the space for the participants to be creative and add new rooms, comments, or pictures.

The feeling of co-ownership worked really well, the only rule was “Don’t delete - just add!”

The program was really long and intense, we had a backbone of presentation by the amazing Nomadic trainee @Highfather @BagelandBalloon @LizzieH @KyrAvram @MarinaKy14 @soly @jyow @awhitney (the time was not working for @LeaLeroy!) and then rooms with discussion, panels and games.

Thanks to a call with @sebquack we had activities that were reinforcing the feeling of being together but without being screen-based, so we organized 3 urban walks (we used a WhatsApp group for it), the first one resulted in a co-created Sky collage, the second was more competitive, the third a poetic farewell (optional and not a lot of people did it)

We didn’t record the session because of privacy and also the uniqueness of being together, but you can find all the Nomadic trainee projects description at these links:

Game for flying by @MarinaKy14

_
Along the day we figured that the evening program was becoming a lot so we decided to reduce it by 45 minutes and not have the after party activities, and I think it was a wise choice, also for our own sanity!

We ended up with a collective self-massage session and then a small ritual and circle of sharing, a title sequence and a dance. 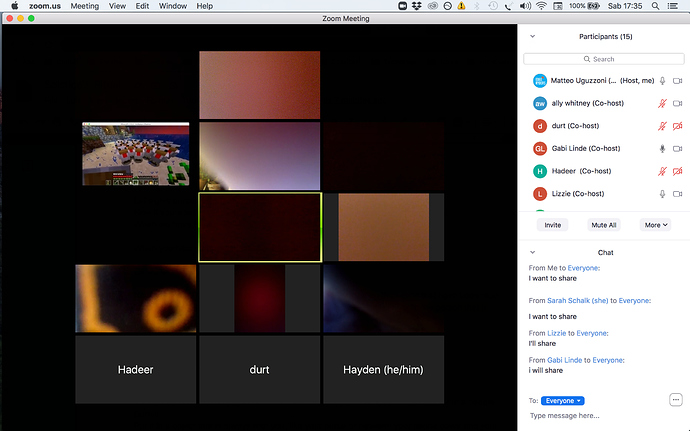 The number of participants was always between 15 and 20, with participants that were from outside of the community as well. 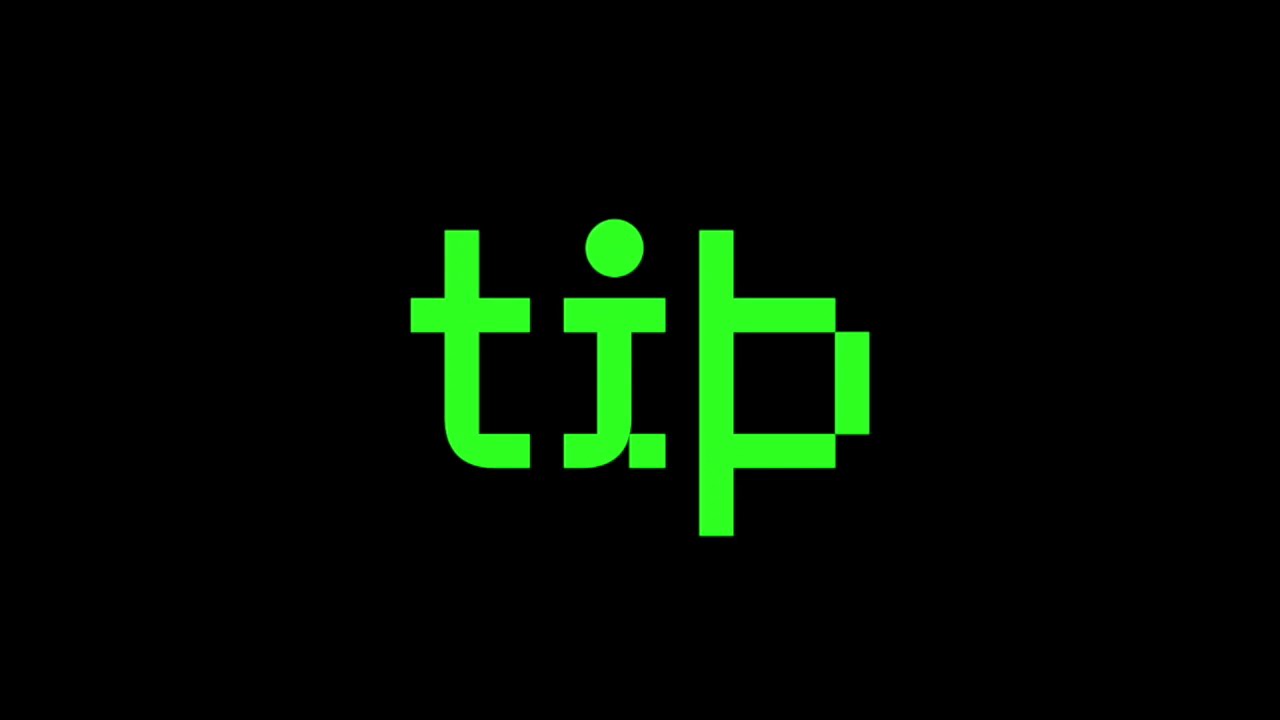 In retrospect there are of course tons of things that I will do differently :)))

First: communication, we were really short handed and not really able to reach out, in this I think that the message of a zoom call during the Solstice it was not really appealing, especially for the day part.

I received answers that said “I’m sorry but I prefer to be outside during the Solstice day” and it make totally sense to me.

I think since we have a clear structured way to have screen based entertainment (videogames, netflix, chat with friends) it’s really hard to create something that is real FUN while you’re sitting in the working attitude.

We did a quick Tarot reading and it worked, and also the self-massage session worked, but I don’t know if you can call it straight entertainment like listen to music or dancing.

Here is the amazing montage made by @MariaS I think it encapsulate a lot of the messiness and colorfulness of the event. 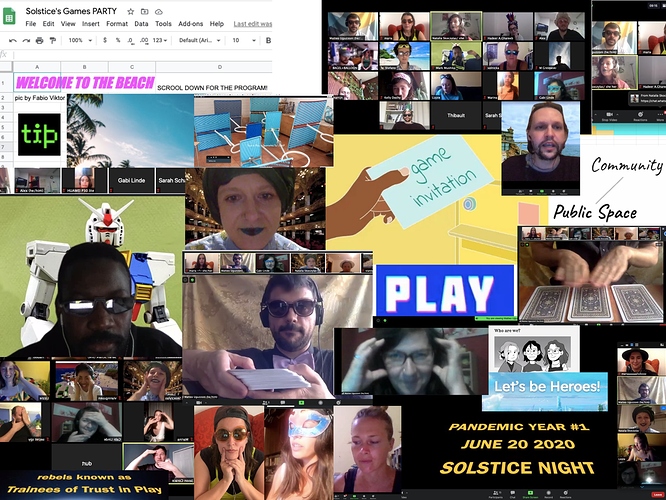 If you participated what are your thoughts?

What was one thing that worked and one that didn’t in your opinion?

What were the state and feeling that you had during the day?

Also, after the call was over I was really energized and the feeling of having spent time with you, real time with real person, was there, until the day after I was still in the same mood <3 <3 <3

The concept is this, when you are developing something that is resemblant to the reality you have to options: 1 you’re able to recreate this reality (usually a lot of budget is required in order to do that), 2 you stay away from the realism and you focus on the thing that make the reality you want to create likable.

This is a profound intuition. I have a long story of remote working/learning together/playing, and wholeheartedly agree with this take. My better online meetings were in Second Life, not on Zoom, for precisely the reasons you describe. I never thought you could have a party on a spreadsheet, and maybe it is the wrong idea, but the process generating it, that is likely to be right. Eventually we’ll get there.

Hi all & thanks @matteo_uguzzoni for the great write-up.

I had a similar feeling, but I think the experiences gained developing and running this event will be super relevant when we reach winter and the pandemic ist still going on. Maybe there’s a kind of mirror or v2 event we could do for Winter Solstice.

I really enjoyed the celebratory mood and the fun stuff with google docs.

One thing I noticed was how such a long online event allows people to come and go freely, and that kind of lets you easily skip deeper conversations which might also be a bit uncomfortable. It’s interesting how real world events can have the effect of “forcing” people into deeper interactions, because the cost of going there and leavig is high (compared to online, where there is no cost to leave and come back at any time).

Perhaps there is a way for v2 of the format to have sign-ups and times set apart for deeper conversations about the games, with breaks around those. This would have been cool after the presentations for example… if the programme is spread out for example over a long weekend, people could make time and commit to the exchanges they are most interested in.