Time Hunter is an urban treasure hunt game where two players use vibration-based hints to find a hidden treasure. Game trailer and Rulebook.

In the summer of 2019, I did a Physical Computing course with schoolofma.org. I was already familiar with physical computing but I lacked the creative and philosophic perspective that is helpful in realising projects that combine computer science and art. The school of machines inspired me to think of computer science as a creative tool. That summer I built a midi-glove for my hip hop performances and later on, an Arduino-powered laser suit for a client’s stand-up comedy show. I am captivated by wearable technology, firstly, its ability to meet the everyday utility of clothes and secondly, to serve some other technological purpose decided by the maker. Wearables are kind of transhumanist in the way that they are a layer away from turning the body into a technology platform.

Shortly after my time at Schoolofma, I was selected to be one of the trainees at Trust in Play: The European School of Urban Game Design. I was assigned to the Nomadic Branch because I was living between Italy, Namibia, and Germany at the time. As part of the school’s programme, we spent a week in Athens, Greece, exploring the theoretical underpinnings of urban games and holding game jams. After Athens, we came up with projects for an urban game. Naturally I gravitated towards an urban game that used some kind of wearable technology. I was inspired by other projects to think of wearable technology as a tool to help players navigate the urban environment. I have always wanted to build a haptic vest with matrices of coin-sized vibration motors that allowed people to send each other massages. With the matrix of vibration motors, users can send patterns of vibrations to their friends, a kind of romance-ware. I immediately started thinking about how such a wearable could enable people to communicate non-verbally, even over distances. A game mechanic formed around this idea to become an urban game that allowed a player to explore an urban landscape guided by vibrations sent by a collaborator. This is the core idea of Time Hunter. 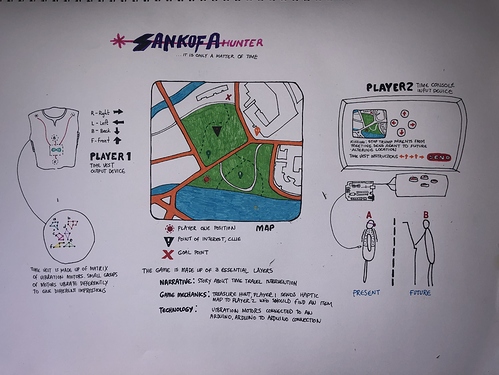 Time Hunter is an urban treasure-hunt game that uses vibro-tactile sensation to drive player-to-player communication and collaboration. While the original concept involves building a vest fitted with vibration motors and a companion mobile application to send vibrations, I decided to first create a lo-fi version of the game that would demonstrate and validate the game mechanics of vibration guided gameplay. My decision was also influenced by disruptions in the supply of microelectronics due to the corona virus. In the place of a networked vibration suit, this version of the game uses mobile phones to facilitate the vibrations and communication. The rulebook illustrates how this is accomplished. The game was play tested in three sessions, two in Namibia and one in Burkina Faso. Players made many useful suggestions; I have summarised them in the points below. 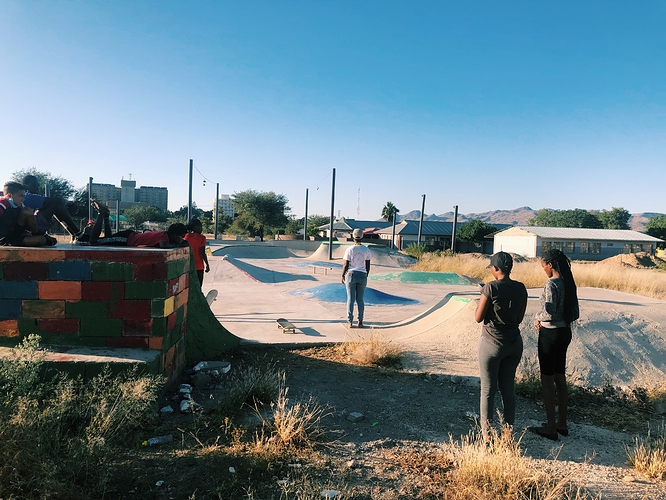 Players were more excited about the mechanics of the game than the objective, however the themes of time travel intervention intrigued them. It helped them immerse themselves in the gameplay. The non-verbal part of the game lead one player to say “The game is harder for controllers because you can’t intervene”. Another interesting point is that as runners, players felt that they relied only relied on vibrations as hints because they felt they had a natural motivation to search. Interestingly, players also mentioned that sometimes they felt overwhelmed by having to use three senses continuously (hearing, touch, sight). They also mentioned the need for vibrations to be more instant. When using mobile phones, sometimes a controller would stop a call but it would still vibrate for a few more seconds on the runner. Players said they enjoyed the game and felt that the development of the time vest would make the game more interesting.

Hello @Highfather thank you so much for sharing this, the trailer is so cool and the view from the drone perspective adds a layer of game/control that is really really interesting!

It seems that players really enjoyed the experience, and I wonder how long it takes them to find the artifact, if playtested with and without a time limit what was the difference, and how was the feeling of playing surrounded by other people that didn’t know what was going on.

I also really liked the glasses, I guess dressing up was a powerful moment to enter the backstory!
Seems a lot of fun, hoping to play soon!

Nice! Love the video. Sad we don’t have enough mobiles in my flat to give the game a go yet

On average it took them about 10 minutes to find the treasure. We sort of ended up with going for “shortest time wins” so we didn’t really test the time limit. After player for a while players said the game was really easy and needed a map with more obstacles to increase the challenge. The spectators were intrigued by the game, mostly they watched to see if the runner would find the treasure quickly. As for the players, they didn’t seem to mind being watched. The skater boys for instance, were quite well behaved. I am really excited about building the vest.

Would be really lovely yes