Reflection on the International Training Week

Two weeks to reflect on an experience like our first Trust in Play International Training week are a good time. The emotions are fading a little, rationality kick in and it’s possible to distill what these 5 days have been for me.

It was almost one year in the making (we decided the days in January) so I was looking at it in the calendar as something mystical, because I’m living temporarily in the US there were tricky VISA issues to solve and this added juice and stress to the mix.

As the organizer of the Nomadic branch I can say that I was a little worried, communication on the platform were not working really well with our Trainee, on our side we were giving a lot of things as granted, at the same time we had the feeling that the group of Independent participant were enthusiast and in big numbers, so I’ve arrived in Athens with a blurry picture of the situation.

The beginning
Luckily during the first day we were able to sit down and at least collect the majority of doubts and questions from the Trainee and the sense of frictions dissipated almost immediately, platform are good in some aspect, but being together in a room it is still the best way to solve doubts and share questions, maybe is not the best thing for the environment, but the human factor works!

I was really busy during the first two days -and a little down because one of my session (thanks @juancarlos for the notes) was attended by just 3 trainees- but the energy in the group was growing and growing, everybody was starting to interact and sparks of “something” was filling the space of Innovathens. 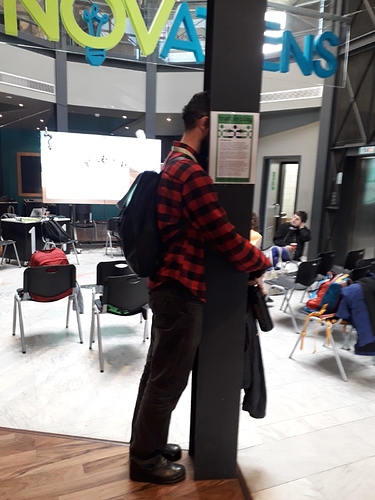 I remember one moment in which I was walking up and down the stairs and I realized that there was people busy everywhere and everybody was in a good mood, the shape of the building was good in this, it kept the energy inside while leaving opportunity for multiple sessions to happens.

Change in energy
The third day was the one that really changed the flow of the week in my opinion, the Unconference.

I had a session about the Future of Trust in Play and then participated in others session, I’ve attended @Anna.szilagyinagy’s session about Instant Environment, then @awhitney TRUSTDREAM session, took a break, then attended @lilyhiggins , @LizzieH and @george_sam session on Ethics in community and finally got an amazing stretching session with @BagelandBalloon and @soly.

In my memory it was a very light day, but I was busiest than usual and I learned a lot.

The final session in particular is the one that stayed with me the most, Francine and Soli did a very good job on bringing us back to our bodies, the hardware that we actually use when we play urban games and that I was forgetting after three days in my head.

The jam, while I saw the development from the outside, it seemed to be a reality check on team work for a lot of the Trainee, with some friction for sure, but at the same time it was way more relaxed that other jam that I’ve attended like Global Game Jam or 72 Hours Urban Interaction and the results were amazing!

For me was especially good to see Trainee that didn’t know each other and maybe had never really “designed” a game have something like OH OH up and running at the end of the week, it was so good to see that happening! 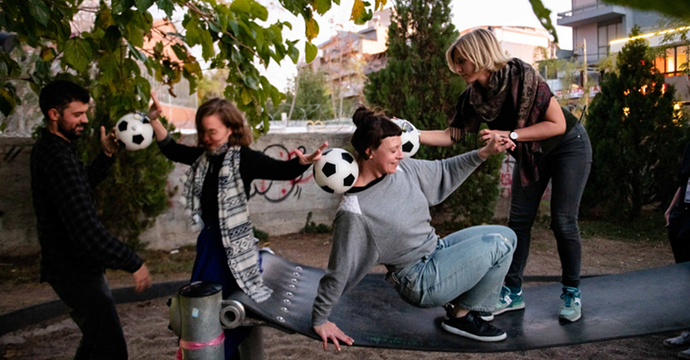 (They were also featured in a local press article!)

Reflections
Reading Francine account I think it has been also really important and I wonder if we manage to share ours Athens how many other insight we will discover about the 5 days that we spent together.

In particular I loved the notes on the idea of school, what is the meaning of this word in this particular moment? With things like youtube or Wikihow is there a need for this kind of environment anymore?

I think that yes, there is a need, but the structure of someone teaching and everybody listening, at least in this field (urban game design), is not making too much sense. Experiment like the Unconference are way more interesting, but it is possible to have unconferences if we are not present in the same time/space?

Theory / mind are important (fundamental in traditional schools) but I felt that for me memory and learning are strictly connected to my body, my clearest memory are related to the stretching session, the Lend me trust by @AnneLorraine or Solis (me running to the bathroom?). I wish that in our school there will be more space for this, working on the “hardware”, learning techniques about that as well. 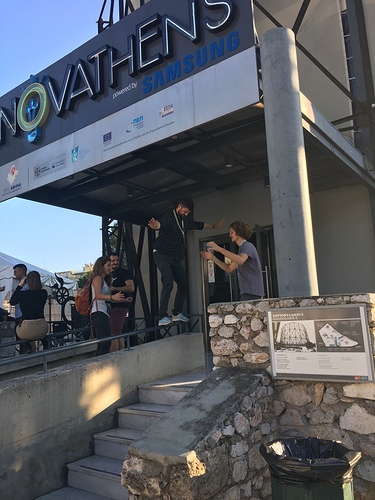 More public space: Innovathens was a special place to test things, but my feeling is that there is an entire chapter of the experience that is how do we negotiate our presence in public space, (a very important and open discussion), @sebquack session addressed it, but my feeling is that this in one of the mandatory things that are at the core of Trust in Play and we just tapped on.

Maybe less contents, I know that this doesn’t make any sense, that we always want to offer more contents so attendants can choose and feel the abundance, but A) it creates a sense of FOMO B) splits the group and it takes more time to get to know each other, which is the goal for the first days.
_

Coming back to “reality” my thought was that I want the rest of my life to be like this week, being surrounded by amazing creative people, create art and experiences together, learn, eat and drink on the streets of a Mediterranean city.

I know that this is not possible, but, at the same time I know (and I saw with my eyes) that it is possible! So I keep put a lot of energy on it!!

And I want to thanks @MariaS @sebquack @kostantina @iris_goethe.de @Matoula_Koutsari for making it happens and have us taking part of it.

_
After the 5 days in Athens I took a bus and spent one night and one day in Delfi, an archeological site 4 hours north.

The site is home of something like 5 natural water springs, so it’s not hard to understand why humans has worshipped there first Gea (Earth), then Athena and finally Apollo (with the byproduct of patriarchy).

I basically didn’t speak for one day, I listened and walked. 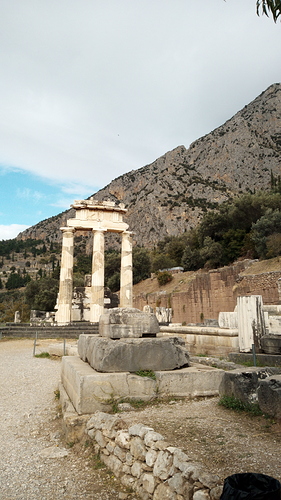 The site was a divinatory one, so I picked up a temple (Athena Pronaia Tholos) and I performed a little ritual.
I asked about the future of our school.

Water started naturally to fall from the sky /
ephemeral streams whispered an answer /
γίγνωσκε σαυτὸν they said /
someone said ναί.

Thanx for this great sharing Matteo - I really jive with your thoughts on how we can incorporate working more in public space! I’ll run a stretching/body session anytime anywhere

Thanks for sharing this! Really nice (nostalgic) to read it.

“how do we negotiate our presence in public space” +1

I think the urban element of our game journey needs to be explored more. It would be interesting to propose a series of experiments or exercises that each branch could do, and share insights.

I was trying to find documentation (but couldn’t) of a community leader in a favela in Rio that created a game-like experience to deal with the tension between the key stakeholders (citizen, police, drug gang A, drug gang B, etc).