After a conversation with @MarinaKy14 I will share here the story of one of the last project that I’ve designed while I was in Italy with Urban Games Factory (the collective I’m part of), the game is called Coincidenze (eng: Coincidence), and was played in Milan, December 17 2015 (a Thursday evening).

After the failure/succes of Codice Indaco I was in a space of self-reflection, trying new collaborations, some of them really cheesy and funny (like this interactive pavilion for Hello Kitty at Lucca Comics, the italian ComiCon).

Milan is a special city to be during the Christmas time, the air is frizzy and the general atmosphere is really festive, but Milan is also a suffocating city, there are no hills at all, it’s very polluted, so you never have that feeling of over, you are always ”under” or “in between”.

From a design perspective I will say that the starting point of the project was really strange, it didn’t started from a mechanics or a goal, but from the feeling of an experience, I wanted our players to be on a rooftop, looking at the city during a winter night, sharing the moment with someone they care.

Anyway: first we needed rooftop apartment or at least a terrace

We sent out an email asking our community if someone was willing on sharing their living room and their terrace for a one night experiment, 5 people answered.

Then we decided the size of the audience, we wanted the participants to have an intimate experience, but not embarrassing, so we ended up with 8/10 for apartment, a total of 40 something.

Finally we started designing the game, on doing this the process was to have games that, during the evening, could lead to a communal sense of belonging, so we designed 3 small tabletop game/experience, starting from something that was really funny and cheesy, ending with a game of sharing your desires and fears for the next year.

We ended up creating giant boxes with numbered boxes inside, some of them were the games, others were just random stuff that could enrich and create a more festive atmosphere, there were plastic animals, chocolate, a Prosecco wine bottle, a Pandoro cake. 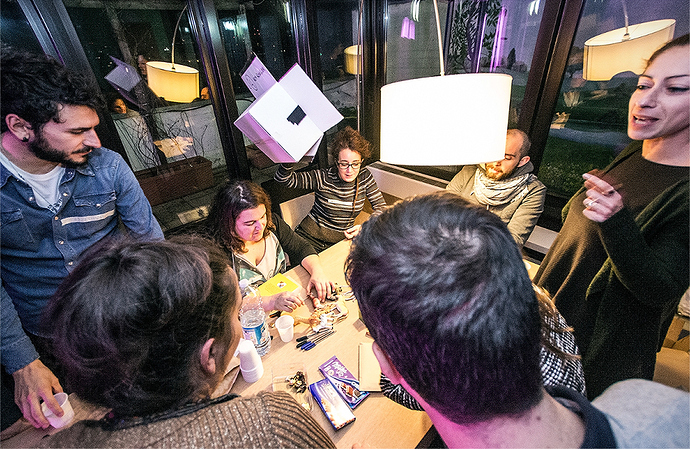 We had to find a way then to coordinate between all the apartments, and we partnered with Shareradio, a Milan based community radio, that was able to set up a live streaming during the night.

So every apartment, as the first activity, had to log in on the Shareradio website and start listening to the live streaming, that was both creating a soundtrack for the night, and giving instruction on when to open the boxes, and suggestion on how to play. 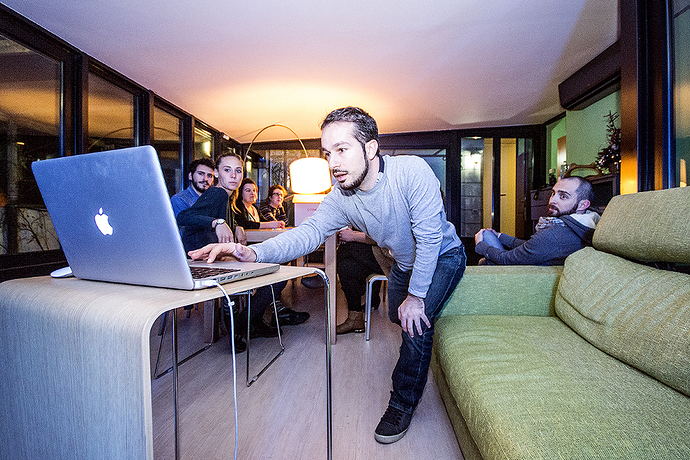 We had also, in every apartment, a volunteer, that was in direct (whatsapp) contact with me so I could know if some place was stuck or everything was fine.

Communication:
when almost every part of the game was designed we launched our call to find the audience, we were asking them if they were coming together or with someone, so we could split them in different apartments. Every one received only the address of their apartment, so the majority didn’t know that there were multiple apartments playing at the same time.

The game was free, so our goal was 60 players and we received 48 confirmation, organically we knew that someone wouldn’t show up, but we were fine with the result.

The night went well, and the different group worked together to build the relationship that we hoped (note that they were all strangers at the beginning of the night).

At the end, after the last game, they were asked to light up flying lanterns, with their fear attached, and on that moment, on the rooftop of a cold winter night, they discovered that other lantern were saying in the sky about the city. 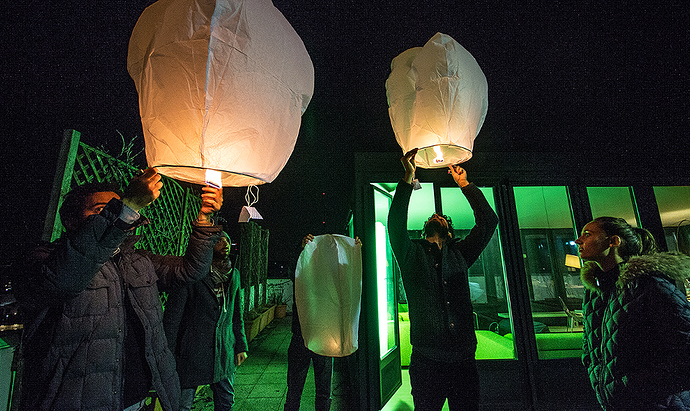 The radio started giving them random instruction about a secret letter hidden somewhere in the box, and they then found a puzzle to solve that was pointing to a location.

Every group left their apartment and converged to an old gym in the city center, were we where waiting for them with a final party.

As usual we had our amazing photographer following one of the groups so we have the pictures of the night, but the majority of the experience was not recorded.

From my perspective I can say that there was a lot of energy when the team arrived to the final location and it was very hard to ask them to leave after 2 hours almost of party.

We did all we could to explain beforehand the game but with some of the owner of the apartment I think we didn’t manage to fully communicate the impact, 3 out of 5 played until the end and they were very happy, one was absent and another one I think was a little nervous/stressed out, but again we did all in our power to communicate everything, but you have to take in consideration that sometimes people are busy and they don’t have the mental space to incorporate informations, so at the end it’s was a down of the project to have one owner not happy.
Definitively a challenge, as in public space!

One final note, one of the games that was inside Coincidenze has become Invisible Cities, a card game about knowing each other and evoke dreamy urban environments.

The game was produced thanks to a small grant by NonRiservato a Milan based network of creative groups/companies/collective.
Here another description of the Coincidenze

I would definitely participate. Congratulations!